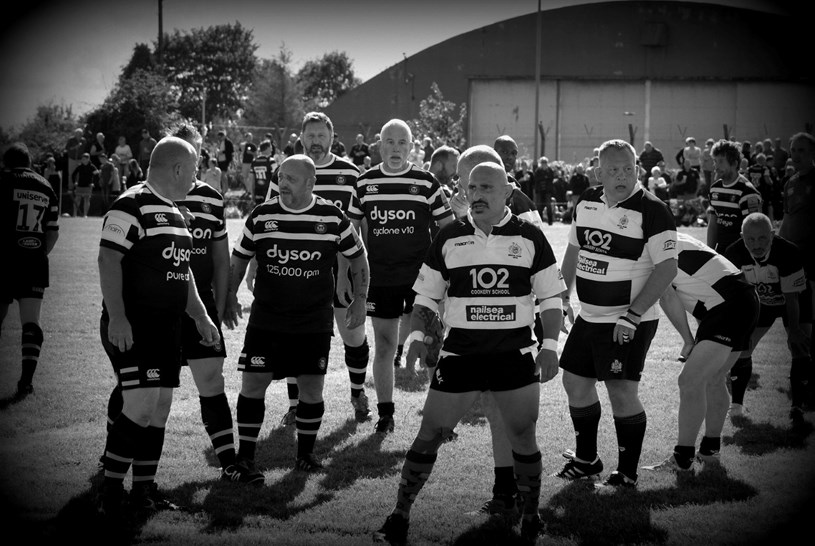 Sunday 1st September saw a very large crowd, well over 1,000, desend on Higgins Field to watch a Legends match (over 45's) from the former players of the Bath and Bristol Rugby clubs in aid of the charities Parkinson's and Springboard and in the memory of former Bath player Robbie Lye. Helen Ashton, wife of former Bath and England coach Brian Ashton, spoke on behalf of the charities and Colerne RFC is proud to announce that £1842 was raised by the gate collection on the day and after further monies came in the final total reached £2,018.86 which will be shared by the charities. Parkinsons has been chosen by the rugby club as their charity of the year because of the number of people it has effected within the village at this time whilst Springboard, the Chippenham based charity for the parents of young children with special needs, was championed by Chris Lilley. Stuart Barnes, the Sky rugby commentator and former Bath and England fly half, welcomed the crowd to the match and spoke along with Chalkie Wardle to remember Robbie Lye, the 2nd most capped Bath player of all time who racked up 457 appearances, but passed away tragically in 2008. Stuart then discussed Bath Rugby past and present with former internationals Kevin Yates and Steve Ojomoh.

The actual match was won by Bristol at a canter 52-14 but the final score might not do justice to the visitors as the scorecard stopped working when Bristol topped the 50 point mark. The younger, fitter Bristol side had a threequarter line with pace to outflank the Bath side with captain Simon Martin leading from the front and putting in a man of the match performance. Colerne RFC would like to thank Chris Lilley for organising the Bath side and Simon Martin for bringing over the visitors from Bris together with the committee, players and friends of Colerne RFC who put in many hours of work in preparation for the match. This hard work paid off as the event was very well organisied and went off without a hitch. Thanks also to the match official's Martin Bath, Claire Danniels and Steve Leysham.

A reasonably large photo gallery of the day can be viewed on the clubs website at www.colernerugby.co.uk and then clicking on the Gallery button on the Home Page top right hand corner.